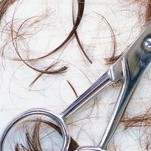 Some motor carriers are asking the FMCSA to grant them an exemption to perform hair testing instead of urine testing for pre-employment drug tests.  They see doing both hair and urine as redundant.  The long window of detection (3 months or more) makes hair testing effective for pre-employment and random drug testing, but because it takes 7-10 days for drug metabolites to appear in hair, it is not well suited for reasonable suspicion or cause and post accident.  Some other disadvantages include, certain drugs (most of the drugs tested for in the DOT 5 like cocaine, amphetamine, PCP, and opiates) are incorporated at a greater rate into darker hair and therefore more likely to lead to positive results in those individuals . Unfortunately, no standardized procedures and technical guidelines approved by the federal government through the Department of Health and Human Services (DHHS) currently exists for hair as for urine.
As the article from Fleetowner below details, many differing and sometimes disparate views are seen regarding this in the FMCSA public comments, pro hair testing and against it, and for good reasons.  In my opinion, until the scientific community comes up with guidelines accepted by DHHS, it is unlikely any exemptions will be granted for using hair in lieu of urine in any circumstances.  However, companies can continue to add hair testing if they wish, as a non-regulated test.

http://fleetowner.com/regulations/request-hair-testing-drug-screening-draws-mixed-reactions?clkthru=fc13c016838bef41719e193c2826http://fleetowner.com/regulations/request-hair-testing-drug-screening-draws-mixed-reactions?clkthru=fc13c016838bef41719e193c2826
Posted by Unknown at 4:18 PM